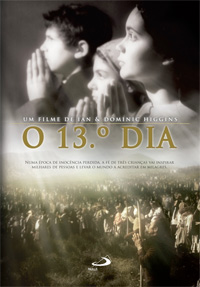 The 13th Day premiered in Fatima at the Sanctuary amphitheatre on October 13th 2009.  Attended by the main cast and crew, we were warmly received by the Portuguese national press and an audience of 1500 people, including the Rector of the Sanctuary. Organised with our Portuguese distribution partner, Paulus Editora, The Premiere celebrated the release of the Portuguese subtitle version of The 13th Day in Portugal.  The 13th Day (O 13o Dia) is available to purchase online at  www.paulus.pt/loja go to Multimedia, in stores in Fatima, and at Paulus bookshops nationwide.   The 13th Day Portuguese subtitle version is now also available to purchase in Brazil by Sao Paolo.

We are working to reach a global audience by May 13th 2010 and are currently in discussion with distributors in: